What I tell you three times is true — “The Hunting of the Snark”, Lewis Carroll

No matter how you write it down, threes show up in speeches, in slogans, and most definitely in stories. Wikipedia informs us that the importance of this number extends to fields as varied as government, photography, and economics.
One reason that threes have this power for us is that we are predisposed to recognize patterns, and three is the bare minimum of instances needed to form a pattern. Or, as Ian Fleming’s villain Auric Goldfinger put it:

“Once is happenstance. Twice is coincidence. The third time it’s enemy action.”

Here are some well-known examples of threes showing up in:

An example from a master

Take a look at how Aaron Sorkin’s character, wordsmith Toby Ziegler uses the power of three when admonishing the White House staff sbout a leak

In case you missed them, here are the ways he employs the power of three:

Not to take anything away from Aaron Sorkin, but let’s see how The Bard does it. Shakespeare employs the Power of Three in a host of ways.

In speech:
“Oh that this too too solid flesh would melt, thaw, resolve itself into a dew.” Hamlet is expressing the same idea three ways, as Mark Antony does in his famous “Friends, Romans, Countrymen”, or as Macbeth does in his simple repetition of “Tomorrow and tomorrow and tomorow”. Simple, yes, but powerful.

Shakespeare uses a three-fold repetition in dialogue as well as monologue. Here’s an example from Julius Caesar:
Act I, scene 2

After all that, you get the idea that the ides of March is going to be important.

Threes also show up in Shakespeare’s plots. In Macbeth, we of course have the three witches, but also the encounter in Act IV, Scene 1 where the witches conjure three apparitions that offer up three predictions. The apparitions also use the power of three when making their predictions which are, needless to say, fulfilled in the Ending Payoff.

In The Merchant of Venice, Portia has three suitors who are given the task of solving the riddle of three boxes.

Other masters of language

Story writers are not unique in using the power of the number three in the written or spoken word. Governments and public speakers provide us with numerous examples:

The Three Movements of Story

The most obvious use of the Power of Three in stories is that we think of them as divided into three parts: Beginning, Middle, and End. This is the “three act structure” you hear so much about, and it goes all the way back to Aristotle.
In Story Grid, we call these three divisions the Beginning Hook, Middle Build, and Ending Payoff. Here’s the way Shawn Coyne explains these terms in The Story Grid: What Good Editors Know:

It’s very useful to remember that the BEGINNING is all about HOOKING your reader…getting them so deeply curious and involved in the Story that there is no way they’ll abandon it until they know how it turns out.
The MIDDLE is about BUILDING progressive complications that bring the stress and pressure down so hard on your lead character(s) that they are forced to take huge risks so that they can return to “normal.”
The ENDING is the big PAYOFF, when the promises you’ve made from your HOOK get satisfied in completely unique and unexpected ways.
STORY distilled is…HOOK, BUILD, PAYOFF. That’s it.

Now, there’s no a priori reason we should think of stories that way. There are methods that teach 4-act, 5-act, 7-act structures, and writers find them useful. Shakespeare in particular is known for using five acts. In the final analysis, however, these methods are overlays on top of the three basic “movements” (I’ve stolen that label from fellow Story Grid Editor Valerie Francis).

This way of thinking in terms of Beginning-Middle-End is not just confined to stories, but seems to be a ubiquitous human trait

And a story is certainly a kind of magic.

Sometimes a hero has to fight a threshold guardian. Sometimes the guardian requires a password.
But sometimes they pose a riddle. The Sphinx’s famous riddle in the Oedipus myth has three parts: “What goes on four feet in the morning, two feet at noon and three feet in the evening?”
Instead of one riddle, the Guardian may ask three questions, as in Monty Python and the Holy Grail.

(By the way, the answer to the Sphinx’s riddle is “Man”, and the last capital of Assyria was Nineveh. You’re on your own about the swallow.)

Shawn Coyne recommends that you put your protagonist through three trials. He didn’t pull that number out of a hat. Once again, it’s about the power of three.

The Three Wishes granted by the genie or talisman is a classic example of three trials, best exemplified by the short story “The Monkey’s Paw”.

William Goldman’s The Princess Bride is a masterwork in employing the power of three. Consider:

Three trials, each with its own set of three challenges. You could do worse than to spend some time studying the story’s construction.

The Five Commandments, and the Power of Three

Oh, yeah, I could hear you mumbling, “But Story Grid has five commandments, not three.”
True enough.
Remember how I said the 5-act structure is an overlay on the three movements of Beginning, Middle, End? Let’s return to Shakespeare and examine Hamlet, a five Act play, in terms of both the Five Commandments and the Three Movements.

Perhaps the most important column in the Story Grid Spreadsheet is the one labeled “Value Shift”. You know, the one that says something like “ Safe to Unsafe” or “Bored to Excited.” The one you have the most trouble with. (For a deeper dive into Value Shift, check out Valerie Francis’ excellent Fundamental Fridays article: https://storygrid.com/value-shift-101/ )
It’s easy to think that the value shift is only about two things, the value at the beginning of the scene and the one at the end. So where does the number “three” come in?

To answer that, I’ll illustrate with an analogy from computer science. A foundational concept in computing is the trio:

This basic idea informs every level of computing, from a single command to an entire system.

Let’s say you want the square root of 2. The diagram would look like this:

You can expand the Value Shift column of your spreadsheet into three. You don’t have to label them with computer terms if you don’t want to, but however you label them the middle column should indicate how the character goes from the initial Value to the final one. You might be tempted to say that the the Story Event or Turning Point column already does that, but that’s not quite the case. Those indicate single events that take place in the scene, but the point of this exercise is that the scene is a process, a sequence of operations on the state of the character that results in them moving from the initial to the final Value.

You can extract these three columns as a separate tool and use it with other Units of Story, doing the same kinds of analysis. (For a discussion of the different Units of Story, see Part 5 of The Story Grid: What Good Editors Know. You can also search this website, as they’re referred to many time.)

A good resource to help you do this analysis is Leslie Watts’ article on Cause and Effect, https://storygrid.com/cause-and-effect/.

To extend the computer analogy, this is a tool for debugging your story.

Tapping the Power of Three

Wow, that was a lot to take in!
Let’s recap and see how you can apply all this.

Three is a magic number that interacts with our thinking on a variety of levels. There are any number of examples. In fact, my guess is you came up with a few on your own.

Your story MUST have three major movements: the BEGINNING HOOK, MIDDLE BUILD, and ENDING PAYOFF, and each one must perform its function. It’s not just a good idea, it’s the law. For more on the functions of the three major movements you can check out https://storygrid.com/editor-roundtable-beginning-middle-end/, where Story Grid Editor Valerie Francis goes into the topic in detail.

Other things you can do to use the power of three:

Give the protagonist three sidekicks, as in The Three Musketeers, or three adversaries, as in The Count of Monte Christo. Think Dumas knew something about the power of three?

If you’re looking at how to use the Archetypes of the Hero’s Journey, you might give the protagonist three Mentors, or have a Trickster perform three acts of mischief, or covertly foreshadow the ultimate revelation of a Shapeshifter three times.

Give the protagonist three major trials or challenges. Try your hand at using William Goldman’s device in The Princess Bride, and give each trial three challenges of its own.

Take a leaf from Aaron Sorkin’s script or William Shakespeare’s folio and have your characters use the power of three in their dialogue. I’ve avoided using technical terms here, but a search of the Internet for “hendiatris” and “tricolon” will give you many more examples and insights.

Repeat an important foreshadowing three times. You don’t have to be as blatant as the “beware the ides of March” example, but then again, you can try it.

If a character is someone who deals in predictions or prophecies, have them make three of them, either in one scene, or three separate ones.

Remember that “Vaue Shift” involves three things. That “to” or “->” in your spreadsheet column is important. It’s the process that effects the shift. You can use this understanding to help you “debug” a story’s problems.

Now, you don’t have to make yourself crazy and try to do all of these at once. Just try a few to start with.
Maybe just three. 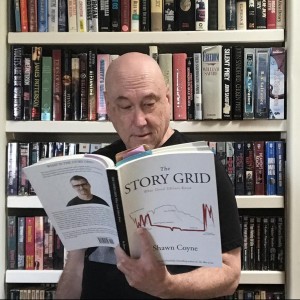