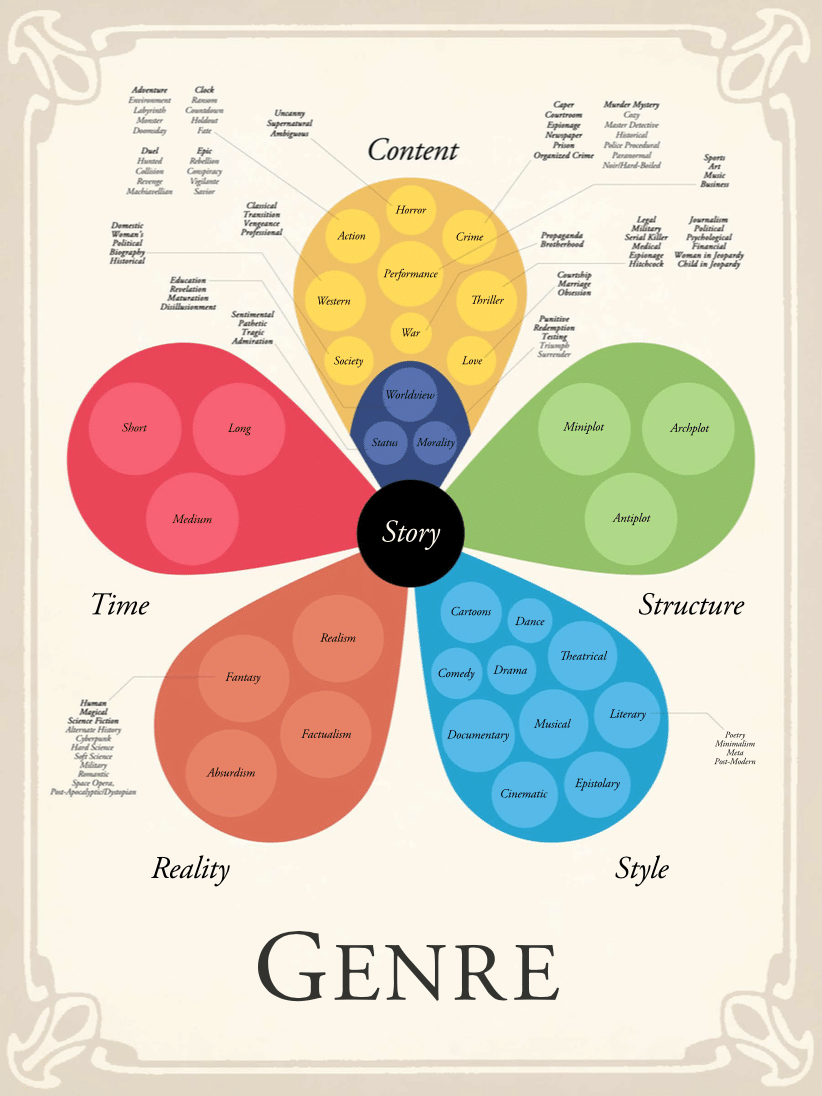 Genre is the one of the most difficult foundations of Story to wrap your mind around. There are so many theories and categorizations of genre that the editor/story student can easily fall into an intellectual whirlpool. I’ve been sucked in so many times by so many different ways to look at genres that my head spins thinking about it.

I’m so susceptible to genre inside baseball that I even named my literary agency, Genre Management Inc., to remind myself of its importance.

Not surprisingly, where I finally come out on genre serves the purposes of my method of editing a story. My goal is and always has been to take comprehensive theory and make it practical. So I started my deep dive into genre with a few core goals.

So my exploration of genre is purely practical.

What follows is a combination plate of theories from many different sources from Aristotle and Plato, to Goethe, to Georges Polti, to Norman Friedman, to Will Wright and others.

But the biggest influence on my thinking is Robert McKee, bestselling author of Story: Style, Structure, Substance and the Principles of Screenwriting, and his colleague Bassim El-Wakil.

Full disclosure, McKee and El-Wakil are clients of my literary agency so I’m certainly partial to their work. However, I do not receive any commissions on McKee’s category killer book Story. But when McKee and El-Wakil release their own book on Genre, I WILL, without hesitation, recommend that you read and digest everything they have to say about it. But until we get their masterwork, here’s a crash course from my experience to get you started.

The most ingenious ideas that McKee and El-Wakil put forth revolve around the interplay of their five distinct categories of Genre, which I will explain shortly. But before we do, just to keep us on track, here is a working definition of Genre so that we know exactly what we’re breaking down:

A Genre is a label that tells the reader/audience what to expect. Genres simply manage audience expectations. It’s really that simple.  Don’t let the French etymology and pronunciation scare you.

We all know what to expect from a mystery novel, a love story, or an action movie. These categories tell us what we’re in for when we pick up a book or go to the movies or the theater. But what are those buried specific expectations that must be satisfied before a story lands with us? What do we expect to know about a story before we’ll even consider listening or reading or watching it? As per McKee and El-Wakil, there are five primary expectations of the audience.

With these five questions in mind, McKee and El-Wakil sorted the myriad of familiar genres we all know intuitively into five major categories.

I find it helpful to think visually and with most of the blood flowing through my veins being of Irish origin (the book publishing company I co-founded with Steven Pressfield is called Black Irish Books) I think of the five categories as leaves on a Five Leaf Clover. Each of the five leaves informs the central locus of the clover, the Global Story.

In order to manage the most primal of reader/audience expectations, writers must make at least five clear choices, at least one from each leaf. And more often than not, with secondary and tertiary subplots, they’ll use more than one from a particular offshoot. But more on those choices later.

Here is how I define McKee and El-Wakil’s five big categories, our leaves on the five-leaf clover that answer each of the questions above.

TIME GENRES answer how long the story will be.

REALITY GENRES answer how far the audience will have to suspend their disbelief.

STRUCTURE GENRES answer how broad or minimalist or nontraditional the global telling of the story will be.

The last leaf, the CONTENT genres, are the ones everyone thinks of when they think of genre. I further divide CONTENT into two sub categories, which I call the EXTERNAL and the INTERNAL. More on why I do this later on.

CONTENT GENRES answer the theme/controlling idea of the story.

EXTERNAL CONTENT GENRES (The black, grey, and red boxes on the infographic) determine the conscious object of desire for the protagonist/s. More on objects of desire later on.

INTERNAL CONTENT GENRES (The blue boxes on the infographic) determine the unconscious object of desire for the protagonist/s.

And here are specific choices a writer has at his disposal for each of the big categories. This list is by no means exhaustive, but it’s comprehensive for our purposes. (Look at the Genre Infographic in the Resources section for reference).

Short Form—these are short films, short stories, or individual scenes in a play.

Factualism—stories that refer to facts of history or biography. They refer to part of the historical record implying “This Story Did Happen,” like the movie Argo or 12 Years a Slave or Serpico.

Realism—stories that could happen in real life, but are imagined, Law and Order, the crime novels of Ian Rankin etc.

Absurdism—stories that are not remotely real, like Eugene Ionesco’s play The Bald Soprano or Looney Tunes

Fantasy—stories of wonder and imagination that require a comprehensive suspension of disbelief, the type of which is delineated by three subgenres.

1. Human—anthropomorphized reality like George Orwell’s novel Animal Farm or fantastical experience like the movie Groundhog Day that can be set in one of two time periods.

2. Magical—stories about fantastical worlds with magical laws that can be mastered by certain beings, but not everyone, like The Lord of the Rings.

3. Science Fiction—Stories about technology turning into magic with no special requirements of the user. That is, it is not necessary to be a Wizard or an elf to employ the magic. Anyone with access to the technology can use the magic. Examples include the sub-sub-genres:

b. Cyberpunk, Neuromancer by William Gibson

STYLE GENRES—the various ways in which we experience a story.

Drama—a tone of solemnity, facing reality as it is. Emotions are truthful and fulfilling.

Documentary—fact based tone like the film The Battle of Algiers or “mockumentary” styles like This is Spinal Tap.

2. Minimalism—short fiction from writers like Raymond Carver, Will You Please Be Quiet, Please?

3. Meta—self-referential works that present stories about stories, like The Crying of Lot 49 by Thomas Pynchon or Infinite Jest by David Foster Wallace.

STRUCTURE GENRES—more on these later.

EXTERNAL CONTENT GENRES—stories driven by a global external value and its positive and negative charge as outlined for each below.

Thriller—Life/Death…possibility of Damnation with a combination of Justice/Injustice (a merging of Action, Horror and Crime) [Grey box on infographic]

Society—the value at stake determines the subgenre, for example the Domestic story is about the Individual/Family dynamic. [Red box on infographic]

INTERNAL CONTENT GENRES—stories driven by the nature of the protagonist/s inner conflict. [Blue boxes on infographic]

Status—Success/Failure moving from one ladder of society to another.

You probably have a general idea of the kind of Story you’ve already written or the one you want to write. You know it in generic terms. Now is the time to reconsider and clearly define your choices. Doing so will ground your work so that when you get stuck, you can always go back to these choices and evaluate whether or not you’ve abided their conventions and/or obligatory scenes.

On the first leaf of our Five Leaf Genre clover are the TIME GENRES, which are usually self-evident. You want to write a novel or a short story or a screenplay for a short film. Any one of them is valid. Any one is easy to label. The same Story and Story Grid principles abide for all of the time genres.

Chances are you’ve picked from the REALITY and STYLE leaves too without thinking too much about them. And that’s fine. Micromanaging the choices you make in Time, Reality and Style can result in paralysis by analysis. Remember, The Story Grid and everything it entails is a tool. It is not an end in itself. So to obsess about whether your Story is a drama with comedic elements or a comedy with dramatic elements is time best spent elsewhere. Terms of Endearment, the novel and the film, use both Comedy and Drama in the telling. You can too with your Story. But when push comes to shove, I think we’d all agree that Terms of Endearment is globally a drama.  It concerns itself with real emotional truth. Whereas, the global Comedy, There’s Something about Mary relentlessly avoids emotional truth.

It’s important though to clearly write down exactly what choices you’ve made. Doing so will allow you to go back later on and make sure that you consistently abide the conventions of those choices.

For the nature of REALITY leaf, if you’re lead character is anthropomorphized, you’re definitely working in the Fantasy arena. If it’s a novel based on a historical event, you’re in the FACTUALISM arena.

I’ll say it again. What’s important is to write all of the choices down.

I’ll suggest a one page Story Grid “Foolscap Method,” a phrase I’ve borrowed from Steven Pressfield and his mentor Norm Stahl, later on that you’ll use as a lifeline to track your global story. It will be the 30,000 foot view that will put you back up in the sky and settle your nerves when you inevitably panic and think you’ve crashed your story. You’ll use the Foolscap Global Story Grid along with The Story Grid Spreadsheet (which tracks the micro movements in your story) to create your final Story Grid infographic.

Now with the first three leaves of our Five Leaf Genre Clover considered (TIME, REALITY and STYLE), we’re ready to detail the complimentary relationship between the fourth leaf—STRUCTURE—and the fifth leaf—CONTENT.