At long last, now it’s time to combine the Macro with the Micro and create The Story Grid for The Silence of the Lambs.

The first thing we need to do is to get out a big piece of graph paper.

I use eleven-inch by seventeen-inch paper that is divided into .25 inch boxes, which will give you sixty-eight boxes from left to right and forty-four boxes from bottom to top. You can also use a spreadsheet program like Excel. Just set it up so that the row and column settings are both at .25 inches.

I turn it so that it is in the horizontal configuration and then count up twenty-two boxes from the bottom which will be just about the middle of the page and draw a thick black line across. This will be the horizontal, or x-axis of our Story Grid for The Silence of the Lambs.

On the horizontal x-axis we will use one box to designate a scene from The Silence of the Lambs. From our Story Grid Spreadsheet, we know that there are sixty-four total scenes in the book, so I label from one to sixty-four across the black line from left to right.

Under and above each of the scene numbers, I’ll boil down each scene event that I’ve written on my Story Grid Spreadsheet to the shortest possible phrase or sentence that tells me what’s happened. I’ll then write down the event above or below the horizontal line to designate the value shift of that particular scene.

What do I glean from The Foolscap Global Story Grid? The Beginning Hook, Middle Build and Ending Payoff of the Global Story. So I’ll move to scene 12 on my sheet and draw a vertical line straight down from top to bottom and I’ll do the same at scene 50.

Now I have the whole novel broken down into the three component parts, it’s Beginning Hook, Middle Build and Ending Payoff.

So, after I’ve combined the Spreadsheet info with the Foolscap for the Beginning Hook of the novel, which comprises the first twelve scenes, the horizontal axis should look like this. 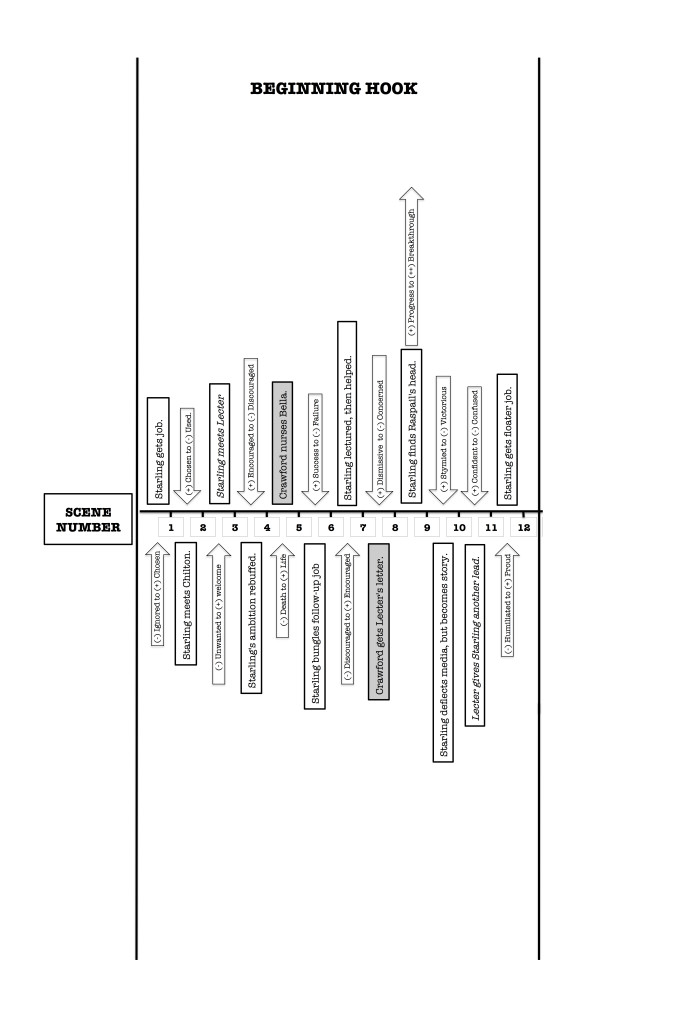 Beginning Hook of The Silence of the Lambs

You’ll notice a couple of things.