How does one begin the editorial process?

You’ve got a first draft of your Big Idea book of nonfiction and you’re not sure what to do next. You know that the manuscript is probably loaded with small and not so small problems, but you have no idea what or where they are.

The first thing you should do is send the “writer” half of your bipolar creative being on a long vacation.

He deserves it after busting his bottom banging out that first draft.

The other half of the creative “you,” the editor, needs to promise that he won’t call the writer guy back from the beach until he’s got a comprehensive plan for the re-writes. Let the guy chill.

I’ll restate this advice as clearly as possible. Do not “fix” anything until you have a comprehensive understanding of what you need to do globally and locally. If you start fixing before you have a complete diagnosis of all of your problems…you’ll inevitably drive yourself crazy.

Bailing out water from your leaky boat before you discover where the big hole is just burns precious time and energy. Inspect every part of the boat first to find out where the big and small holes are. Fix the big ones, then work your way down to bailing out the water.  If you haven’t seen this movie, All is Lost, check it out to see how an experienced sailor deals with disaster.

Today’s easy fix (bailing out water) is tomorrow’s problem. There could be even more water than when you began bailing if you don’t fix the hole first.

So have the courage to live with the wetness as you diagnose the seaworthiness of your Story for as long as it takes after that first draft. Take your time. The payoff of deep hard editorial thinking is extraordinary and it will save you much agita later on.

So how do you figure that out what’s wrong, globally (Big Holes!) and locally (small punctures)?

You begin with the details…the Micro editorial perspective of your Story.

And the Micro element of your Story will reveal itself, in all its ugliness and beauty, when you create The Story Grid Spreadsheet.

So let’s create The Story Grid Spreadsheet for the beginning hook of The Tipping Point.

[Keep in mind that I’ll be working through the book now after having broken it up into its Beginning Hook, Middle Build and Ending Payoff…but I was not able to make those Macro determinations until I’d completed the Micro Spreadsheet. The Macro element of The Story Grid, The Foolscap Global Story Grid, can only be completed in its entirety after you’ve taken stock of the Micro.]

I began to map out the spreadsheet for The Tipping Point way back in May 2015 and have been tweaking it ever since.

I went scene by scene, chapter by chapter from page one through page two hundred eighty. Over and over again…

And like I did in Chapter 55 of my book The Story Grid when I storygridded The Silence of the Lambs, I started working on The Tipping Point by tracking its global Story. Which requires determining only three elements…SCENE NUMBER, WORD COUNT and STORY EVENT.

Scene number and word count are wonderfully easy to calculate…which is a terrific way to get your editorial engine primed. It doesn’t take a lot of brain power to add.

But what of Story Event? What’s that again?

A Story Event is a meaningful change in the life of the central character. And that change must be expressed as a polar value—life/death, lie/truth, cold/hot, strength/weakness, courage/cowardice, loyalty/betrayal, wisdom/stupidity, known/unknown etc.

All that Story Event implies is that something has to happen.

If nothing changes, there is no Story Event. All of the words on the page, no matter how eloquently put together, amount to a big fat narrative STOP sign, if the scene doesn’t turn. You’ll lose your reader’s interest if you don’t turn your scenes.

Enough of the theory. Let’s get to it.

Here are the first four scenes in The Tipping Point that comprise the Beginning Hook of the entire book:

How did I break up the Beginning Hook of the entire book into just four scenes?

Here’s the great thing about The Tipping Point. It was brilliantly edited.

This is in no way saying that Malcolm Gladwell could not have written a successful book without the help of his editors. In fact Gladwell is in all likelihood, a remarkably talented editor himself.

It was the editing that made The Tipping Point a monster bestseller. It made all of the difference.

My twenty-five year old publishing gut screams out to me that his agent, Tina Bennett, had quite a bit to do with the structure of the book before his formal editor (Bill Phillips at Little Brown) came on board. And that once Phillips got his hands of Gladwell’s first draft, he masterfully helped Gladwell break the book into its brilliant little bite-sized nuggets of Story.

Where does that un-sourced supposition come from?

Just pick up the book again and look at the way there are very clear demarcations that literally break (and even number) shifts in Story content within a particular section of the book. For example, the Introduction of The Tipping Point is broken into the four scene bits I’ve gridded above.  It’s like Gladwell, Bennett and Phillips storygridded the book before there was even a story grid…

And from those four little bits, you get the entire content of the book in a little over 3000 words…all of the major points and all of the mind-blowing conclusions are there for the taking. But like any beginning hook, those little bits promise far more if you make the commitment to keep going…

Now that we have our Global Story data points filled in for the beginning hook (scene number, word count, and story event), let’s move on to the next section of the Story Grid Spreadsheet, Tracking the Scene.

As you’ll recall from my analysis of The Silence of the Lambs, the next three columns on The Story Grid Spreadsheet represent the mechanics of each scene.  That is, how the Story progressively moves forward.

They are: VALUE SHIFT, POLARITY SHIFT and TURNING POINT

Here’s the data for those first four scenes:

For more information about Turning Points, read this.

The last eight columns on The Story Grid Spreadsheet of The Tipping Point are all about Tracking Continuity of non-fiction Storytelling. These columns are only marginally different from those we used to track the continuity in The Silence of the Lambs.

The major difference is in our tracking the ideas and how Gladwell supports those ideas, rather than the way we tracked the fictional characters’ coming and goings in Thomas Harris’s masterpiece. It’s as if the ideas take the place of “characters” as the central focus of the Story.

Are we integrating and reiterating our examples and data points in ways that reinforce the core concepts of our Big Idea? That is, are we building an argument logically while we tell our story?

These eight columns will tell us if we are doing that well. They will tell us if we’ve introduced a concept early on and then abandoned it. Or if we’re hammering the same thing over and over again without adding additional expert testimony or data support.

These eight columns show you just how much work Gladwell did to keep his Story moving while also adding gravitas to his arguments. Narrative simplicity requires a stoker’s dedication to shoveling tons of coal into the furnace to produce a critical mass of heat. You’ll see exactly how Gladwell did that throughout the Spreadsheet, how he kept coming back to primary concepts and stories again and again throughout the build of his larger argument.

The eight TRACKING CONTINUITY columns for the Big Idea Story Grid Spreadsheet are as follows: 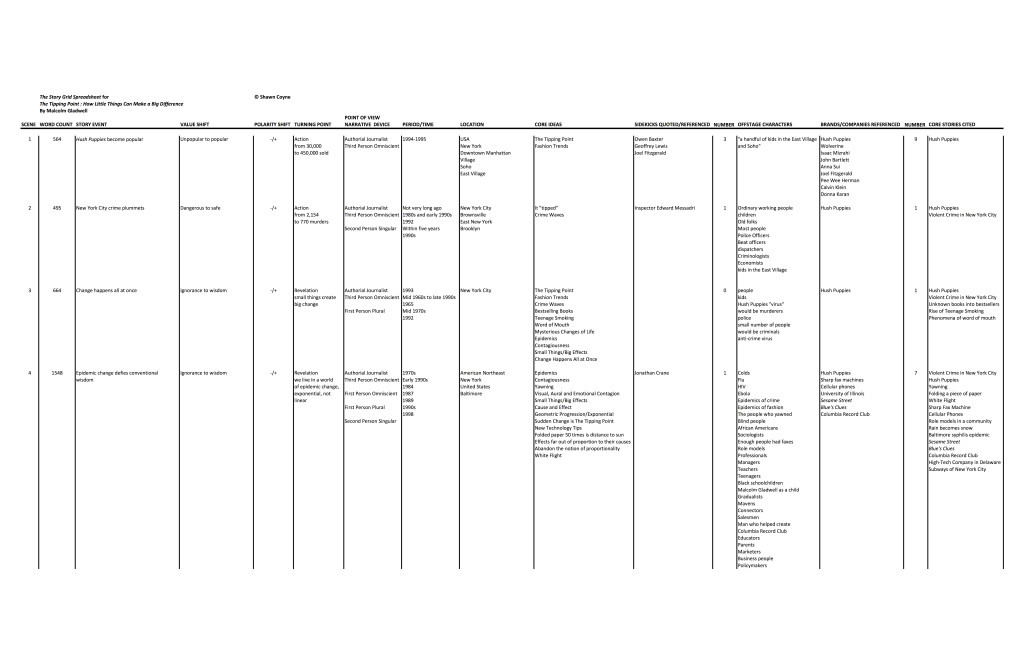